BLACKFOOTEDFERRET.ORG
FERRET DECLINE
The black-footed ferret is thought to have been common on prairie ecosystems prior to European settlement of western North America. However, starting in the 1900s, ferret populations experienced a devastating decline so dramatic that the species was thought to be extinct by early 1970s until a single extant population was rediscovered in 1981. The causes for these declines are due to a combination of factors including habitat loss and disease described in detail below.
Habitat Loss

As European settlements moved westward, people began to realize that the prairie was some of the most fertile land available. Crops were fairly easy to grow, and there was plenty of grass for farmers to graze their livestock. With the arrival of the plow, large expanses of native prairie were converted to farmland, thus eliminating land for native plants and grassland dependent animals.
​
Despite being a keystone species prairie dogs were, and in many areas still are, considered pests. Many people believe prairie dogs compete with cattle for forage. Large-scale poisoning programs initiated in the early 1900s dramatically reduced prairie dogs numbers, leaving only small and isolated populations. Poisoning is still common in many areas of the Great Plains. In addition to cultivation and prairie dog eradication campaigns, urban sprawl also contributes to prairie habitat loss.​ 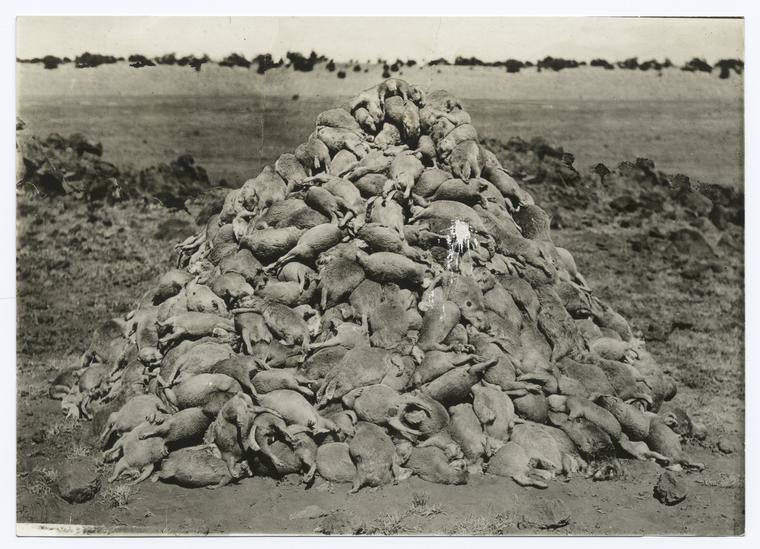 Result of poisoning operations for prairie dogs at one location in the early 1900s. Operations such as this occurred throughout western North America.
​Before European settlers, there were an estimated 502,000 square miles (320 million acres) of prairie habitat. Researchers estimate that only one percent of the original prairie in the United States remains undisturbed by human activity. However, much of the former range of the ferret and prairie dog remains suitable for their existence. 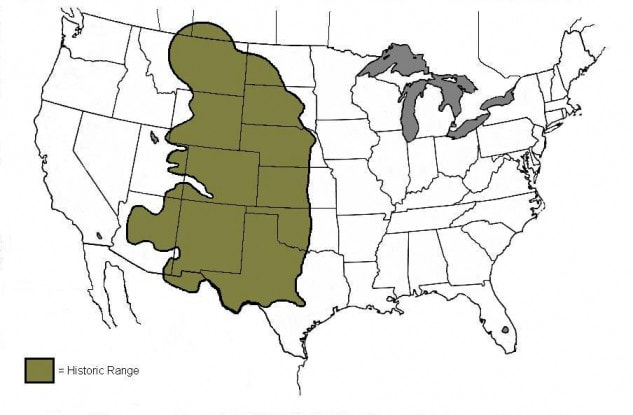 Black-footed ferrets are susceptible to a number of infectious diseases including influenza, numerous intestinal parasites, and tularemia. The two diseases of greatest concern to the captive and reintroduced populations are sylvatic plague and canine distemper. These diseases have been attributed to the decline and extinction of wild ferret populations.

Sylvatic plague is a form of bubonic plague, which is known as the “Black Death” and is responsible for 25 million human deaths in the 1300s. It is caused by the bacteria Yersinia pestis. Rats are the primary host and fleas transmit the disease to other animals and people. Due to increased hygiene and the advent of antibiotics, the threat of plague to humans is minimal.

However, a vaccine developed by the US Army and the US Geological Survey has proven to be effective at preventing the disease in black-footed ferrets. This vaccine is an injection followed by a booster about 3 weeks later, and appears to provide life-long immunity to plague. All captive ferrets receive this vaccine prior to being released into the wild. Efforts are ongoing to capture and vaccinate wild-born black-footed ferrets. While vaccination of captive ferrets is fairly easy, vaccination of wild-born ferrets is time consuming and labor intensive.
While vaccination of ferrets and dusting prairie dog burrows are excellent tools in the fight against plague, they are not long-term solutions. Currently, efforts are underway to develop an oral plague vaccine for prairie dogs. The hope is that if the prairie dogs are immune to plague, it will not spread through the colony and ferrets will not contract the disease (called “herd immunity”). Researchers are also exploring alternative methods for reducing the number of fleas within prairie dog colonies by testing the effectiveness of baits containing insecticides. ​
Canine Distemper

​Canine distemper is caused by a virus called a paramyxovirus. It is commonly associated with domestic dogs and domestic ferrets, but is also found in wild canids, mustelids and other animals. It can cause respiratory illness, gastrointestinal illness, neurological problems, and eventually death. It is spread by contact with infected respiratory droplets, feces, urine and bodily fluids.
​
The mortality rate in black-footed ferrets approaches 100%. Distemper is not as common or devastating as plague, but can still pose a threat to isolated ferret populations. Prairie dogs are not susceptible to the disease.
​
There is now a safe and effective vaccine against canine distemper for black-footed ferrets. It is a recombinant canarypox vectored vaccine. This vaccine requires an initial dose, then a booster 3-4 weeks later. It is administered to all captive ferrets prior to release and any wild ferrets that are captured during routine surveys.
Click below to view additional educational resource pages.