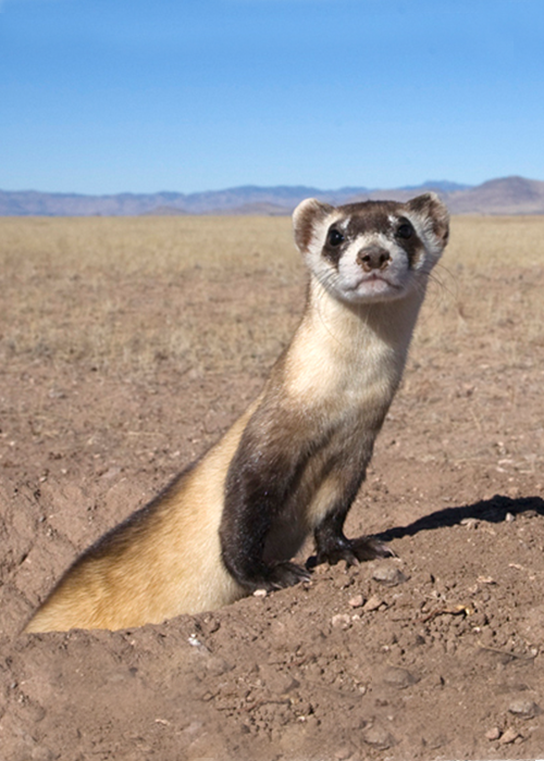 History of the Black-footed Ferret
​
Native Americans were the first humans to know about the existence of black-footed ferrets. Skeletons of ferrets and prairie dogs have been found in camps occupied by prehistoric Indians. Many different tribes including the Sioux, Navajo, Cheyenne, Blackfeet and Crow used black-footed ferret body parts, skins and furs for medicinal purposes and ceremonial adornments. Many tribes considered the ferret to be sacred.

Throughout their history, black-footed ferrets have been elusive. They were occasionally listed in fur company records in the early to mid-1800s. John James Audubon and the Reverend John Bachmann were the first to officially describe black-footed ferrets in 1851 from a single specimen found near the Platte River. They were so elusive to humans that shortly after Audubon’s description, controversy brewed over their true existence.

European settlement across the North American prairie dramatically altered the landscape through plowing and prairie dog eradication efforts. As their habitat and primary food source diminished, so did the black-footed ferret. By the late 1950’s, black-footed ferrets were thought by many to be extinct.
​
Second Chance Lost

In 1964, a remarkable discovery was made when a small population of black-footed ferrets was found in Mellette County, South Dakota. Biologists studied these ferrets, and after a few years noticed the population was starting to decline. They captured nine ferrets and brought them into captivity in the hopes of starting a captive breeding program. The wild population died out in 1974. Unfortunately, captive breeding efforts were unsuccessful in producing surviving kits and the last ferret died in captivity in 1979. The black-footed ferret was considered extinct for a second time.​

Shape Divider - Style triangle_asymmetrical
Examples of notifications posted throughout Wyoming during the period of time when black-footed ferrets were thought to be extinct.
Shape Divider - Style triangle_asymmetrical
Research conducted on the Meeteetse ferrets provided important new information on the life history and behavior of this secretive mammal. The population peaked to 129 ferrets in 1984. By 1985, biologists saw the population declining, just as it had in South Dakota. Canine distemper virus and sylvatic plague were believed to be the culprits. Between 1985 and 1987, 24 black-footed ferrets were captured in an effort to save the species.

The ferrets from Meeteetse were brought to a captive breeding facility in southeast Wyoming. Unfortunately, six of those animals died soon after of canine distemper. The Wyoming Game and Fish Department and the U.S. Fish and Wildlife Service began the captive breeding program with the only surviving 18 ferrets from the Meeteetse population. Click here to learn more about captive breeding.
​
Since 1991 federal and state agencies, in cooperation with private landowners, non-profit organizations, Native American tribes and the North American zoo community have been actively reintroducing ferrets back into the wild. Beginning in Wyoming, reintroduction efforts have since expanded to sites in Montana, South Dakota, Arizona, Colorado, Utah, New Mexico, Kansas, Canada and Mexico. Click here for more information about black-footed ferret reintroduction.
​
Recovery of the black-footed ferret is attainable. However, there are still obstacles to overcome including disease and habitat loss. To learn how you can help, click here.
Click below to view additional educational resource pages.