BLACKFOOTEDFERRET.ORG
Background
The primary biological challenge to recovery of endangered black-footed ferrets (BFFs) is sylvatic plague, caused by the bacterium Yersinia pestis, and vectored primarily by fleas. Plague has eliminated thousands of acres of prairie dog colonies in a short time at many BFF reintroduction areas, including the site where the last wild population of BFFs was discovered in 1981 near Meeteetse, Wyoming. Various insecticide dust products have been used successfully for decades in efforts to control fleas and prevent plague. Those treatments are expensive, costing around $30/acre, as the dust needs to be applied down hundreds to thousands of prairie dog burrows on their colonies. In addition, fleas can develop resistance to insecticides, so new, affordable, and practical tools are desperately needed to control fleas/plague on tens of thousands of acres of prairie dog colonies.

Researchers evaluating an experimental plague vaccine for prairie dogs learned that distributing small peanut butter flavored baits on transects at a rate of 50 baits/acre resulted in the vast majority of prairie dogs on a colony finding and eating a bait (Matchett et al. 2021). They also worked out a method and equipment to efficiently mass produce hundreds of thousands of round bait pellets using a machine from Lithuania that was originally designed to make carp fishing baits (BoilieRoller). In addition, World Wildlife Fund and the FWS worked with an inventor to make a machine capable of automatically dropping one of those bait pellets straight down, shooting one 30 feet to the left, and shooting a third bait 30 feet to the right, effectively distributing baits along three transect lines simultaneously. On average, one person can distribute 50 baits/acre over 50 acres in one hour with a “triple-shooter” mounted on an ATV.​
Fipronil is the active ingredient in Frontline spray that has been used topically on dogs and cats to control fleas and ticks for more than 25 years. Researchers began evaluating grain  treated with fipronil (0.005% by weight) placed at prairie dog burrows for flea control on PDs in 2016 (Eads et al. 2019). Fipronil grain treatments are also expensive, costing around $30/acre, as the label calls for placing 1/2 cup of treated grain at every PD burrow.​

​A wildlife biologist with the FWS integrated fipronil for successful flea control, the BoilieRoller for mass bait pellet production, and the triple-shooter for a practical and efficient bait distribution system, to create a fipronil bait pellet made from all food-grade ingredients, including peanut butter and molasses, that also contained tiny amounts of fipronil and dubbed them “FipBits”. Researchers in Arizona, Montana, and South Dakota reported nearly 100% flea control on PDs one year after a single treatment of 50 FipBits/acre (2.2 ounces of FipBits/acre) and very good flea control two years after a single treatment on some experimental plots (Matchett et al. 2023).
The ingredients to make FipBits cost about $0.50/acre, and with the efficiency of distributing them along transects with a triple shooter, flea control with FipBits is expected to cost 90% less than using insecticide dust or fipronil grain. The FWS and colleagues are evaluating different active ingredients used to control fleas and ticks on dogs and cats with oral “treats” as a substitute for fipronil in the FipBit manufacturing and distribution model. The FWS is also working with regulatory agencies to expand and refine FipBit use and many people are hopeful FipBits may become a “game-changer” in the battle against plague in support of BFF recovery.
​ 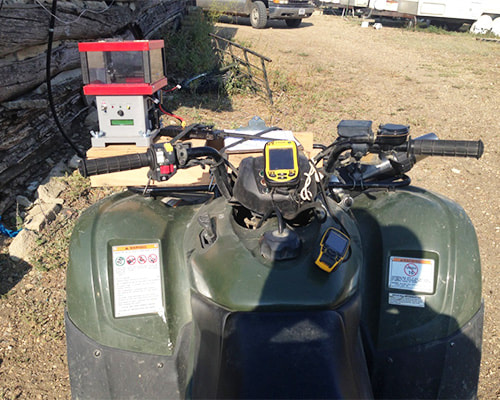 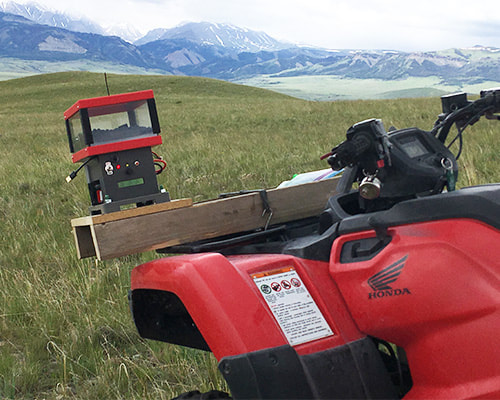 Examples of the triple-shooters mounted to ATVs used to distribute FipBits ​on prairie dog colonies.